Invited as a guest curator, Ingrid Ledent from Belgium selected four institutions with print programs from around the world to represent  top quality in printmaking education. The show consisted of graduates from four institutions: Musashino Art University (Tokyo, Japan), Academy of Fine Arts (Antwerp, Belgium), The Central Academy of Fine Arts (Beijing, China), and the University of Alberta (Edmonton, Canada).

The exhibition was held at the new China Print Museum in Guanlan, China between October 16 – November 16th 2015. 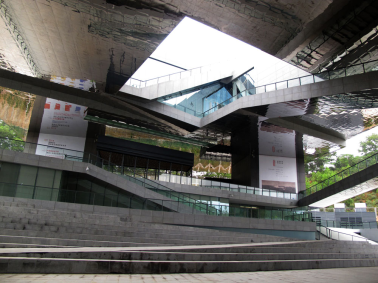 A view from the outside of the China Printmaking Museum.

A view from the inside of the China Printmaking Museum.

Doodley Do Unto Others
Kurt Vonnegut Museum and Library
Indianapolis, IN
October 15th – November 15th, 2020